“70% of European e-shoppers may stop buying from UK websites,” reveals a study conducted by GfK for DPDgroup.

Paris, 15 October 2019 - Payment of additional taxes and duties, as well as longer delivery times, could prove a stumbling block to the future development of cross-border e-commerce in Europe.

DPDgroup tasked market research institute GfK with conducting a survey amongst 24,258 e-shoppers in 21 European countries to assess trends in e-commerce. The study reveals1 that, should additional costs apply, 70% of e-shoppers purchasing from UK websites may stop doing so while 69% of UK e-shoppers would simply stop buying cross-border altogether.

In the event of a no-deal Brexit, goods purchased online between the UK and European countries could require the payment of additional customs duties, taxes and administration fees. End consignees may need to pay those charges prior to delivery, once their purchased goods have reached the destination country. The goods would be retained until these extra charges are paid, resulting in supplementary steps and longer delivery times.

With a no-deal Brexit, additional taxes and duties would immediately apply to cross-border flows between European countries and the UK. Though these mandatory charges are unavoidable, longer delivery times, another significant consequence, can be mitigated.
DPDgroup has designed a specific billing solution for e-tailers who ship parcels from and to the UK. This solution enables an online payment of customs duties and taxes by the e-shopper at the moment of the purchase on the website. As customs duties and taxes are paid in advance, no administration fee will apply. Hence, parcels shipped with this solution will immediately enter DPDgroup’s network on arrival in the destination country, avoiding retention time for customs clearance.

“Brexit ready” for all outcomes

Since the Brexit vote, DPDgroup has reviewed the possible outcomes and prepared solutions to ensure the large volume of customs procedures for its clients’ trade in the UK and Europe remain smooth.
As an Authorised Economic Operator, DPDgroup manages daily parcel shipments worldwide, including customs clearance operations. DPDgroup has invested in its customs clearance teams and facilities to provide an integrated service.
In preparation for a no-deal scenario starting on 1 November, DPDgroup will operate a gradual shift as of 24 October to adjust routes and begin customs clearance services in dedicated gateways (in the UK, Ireland, France, the Netherlands and Spain) to and from the 27 European countries.
While two weeks separate Europe from the Brexit deadline, significant uncertainties still persist on many fronts.
DPDgroup, though fully prepared for all outcomes, remains hopeful that a deal will emerge from the negotiations. 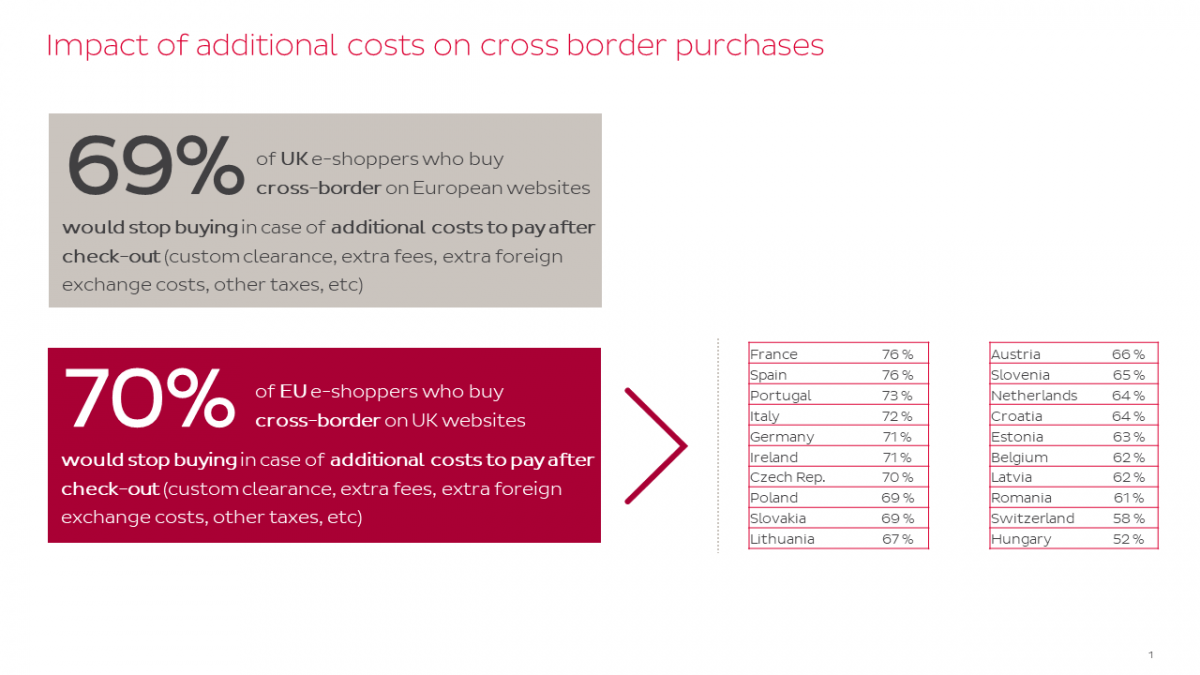 DPDgroup is Europe’s second largest parcel delivery network.
DPDgroup combines innovative technology and local knowledge to provide a flexible and user-friendly service for both shippers and shoppers. With its industry-leading Predict service, DPDgroup is setting a new standard for convenience by keeping customers closely in touch with their delivery.
With more than 75,000 delivery experts and a network of more than 42,000 Pickup points, DPDgroup delivers 5.2 million parcels each day through the brands DPD, Chronopost, SEUR and BRT.
DPDgroup is the parcel delivery network of GeoPost, which posted sales of €7.3 billion in 2018. GeoPost is a holding company owned by Le Groupe La Poste.

1  The question was “Would you continue to buy from foreign websites in the future if there were additional costs to pay after check-out (custom clearance, extra fees, extra foreign exchange costs, other taxes, etc.)?”.