DPDgroup pursues its growth strategy and confirms its European leadership

Paris, 27 February 2020 - DPDgroup released its 2019 results on February 27 with revenues of €7.8 billion. This performance has been achieved in a highly challenging environment: increasing restrictions on delivery in city centres, an overall shortage of drivers and an increase in related costs.

1. Performance driven by profitable growth rather than by volumes

"We are not volume-obsessed. Our 2019 performance is driven by profitable growth. As a market leader, it is our responsibility to pave the way toward a better pricing policy. Covering the increasing operational costs throughout Europe while improving our service performance as a premium player can only be made possible by fair pricing that our customers understand.”

As first cross-border road network in Europe with its own operations in 23 countries, DPDgroup reported particularly stroThe European market keeps growing, still largely driven by the BtoC segment. DPDgroup relies on a hybrid BtoB-BtoC network. In 2019, its BtoB segment still accounted for 55% of DPDgroup’s volumes, while DPDgroup’s BtoC volumes segment in Europe showed a 9% increase.ng sales growth in Poland (+18%), the UK (+5.7%) in a context of economic slowdown and uncertainty in light of Brexit, France (+5.5% by DPD France and +6.6% by Chronopost), and Germany (+4.5%) in an environment of increasing costs.

On 29 January 2020, the European Parliament ratified the Brexit withdrawal agreement that had been ratified earlier in January by the UK Parliament. DPDgroup will closely follow the progress of negotiations and ensure being Brexit ready for all outcomes. Above all, DPDgroup will maintain operations as usual between the UK and the EU so that trade continues to be as frictionless and smooth as possible.

2. Premium services lie at the heart of the Group's strategy

As revealed in the 2019 DPDgroup e-shopper barometer[1] , one of the many emerging trends appears in the growing environmental awareness among the general population, through the appearance of eco-selective e-shoppers who seek responsible actions from companies.

4. Further expansion in Europe and beyond

Created in 1999, GeoPost has established the robust DPDgroup network over the past 20 years by gaining a strong foothold in a majority of countries. In 2019 GeoPost pursued its external growth through several acquisitions predominantly in Europe.

Jadlog, the Group’s subsidiary in Brazil recorded a strong growth of more than 47% in parcel services revenues year on year, riding the wave of a booming e-commerce market. Thanks to its dense franchisee & PUDO network, innovative offering and state of the art IT platform, Jadlog strengthened its recognition as a key player for its B2B and B2C clients.

DPDgroup took a minority stake in Ninja Van in 2018. In 2019, the Group brought continuous support allowing Ninja Van to grow at breakneck pace and become one of the leading market players in its 6 active markets: Indonesia, Malaysia, Philippines, Singapore, Thailand, and Vietnam.

DPDgroup acquired a majority stake in Lenton, the Asian-based cross-border service provider. This confirms a close cooperation between the two operators and enables the DPD brand to be deployed in China.
This acquisition is a further step in the growing internationalisation of the Group with the ability to connect the Chinese market with the European DPDgroup network, leveraging future growth opportunities.

“As a leader in e-commerce and last-mile delivery, especially throughout Europe, DPDgroup’s majority stake acquisition in Lenton will help accelerate the development of innovative products and e-commerce solutions even more, while reinforcing the Group’s cross-border capabilities for our customers,” said Olivier Storch, Executive Vice President, COO Asia – Pacific - Americas.

DPDgroup combines innovative technology and local knowledge to provide a flexible and user-friendly service for both shippers and shoppers. With its industry-leading Predict service, DPDgroup is setting a new standard for convenience by keeping customers closely in touch with their delivery.

With 77,000 delivery experts and a network of more than 46,000 Pickup points, DPDgroup delivers 5.3 million parcels each day – 1.3 billion parcels per year – through the brands DPD, Chronopost, SEUR and BRT.

DPDgroup is the parcel delivery network of GeoPost, which posted sales of €7.8 billion in 2019. GeoPost is a holding company owned by Le Groupe La Poste.

[1] For more information about the e-shopper profiles and insight on future e-commerce trends, please visit our website at: https://www.dpd.com/group/en/expertise/e-shoppers-in-europe/ 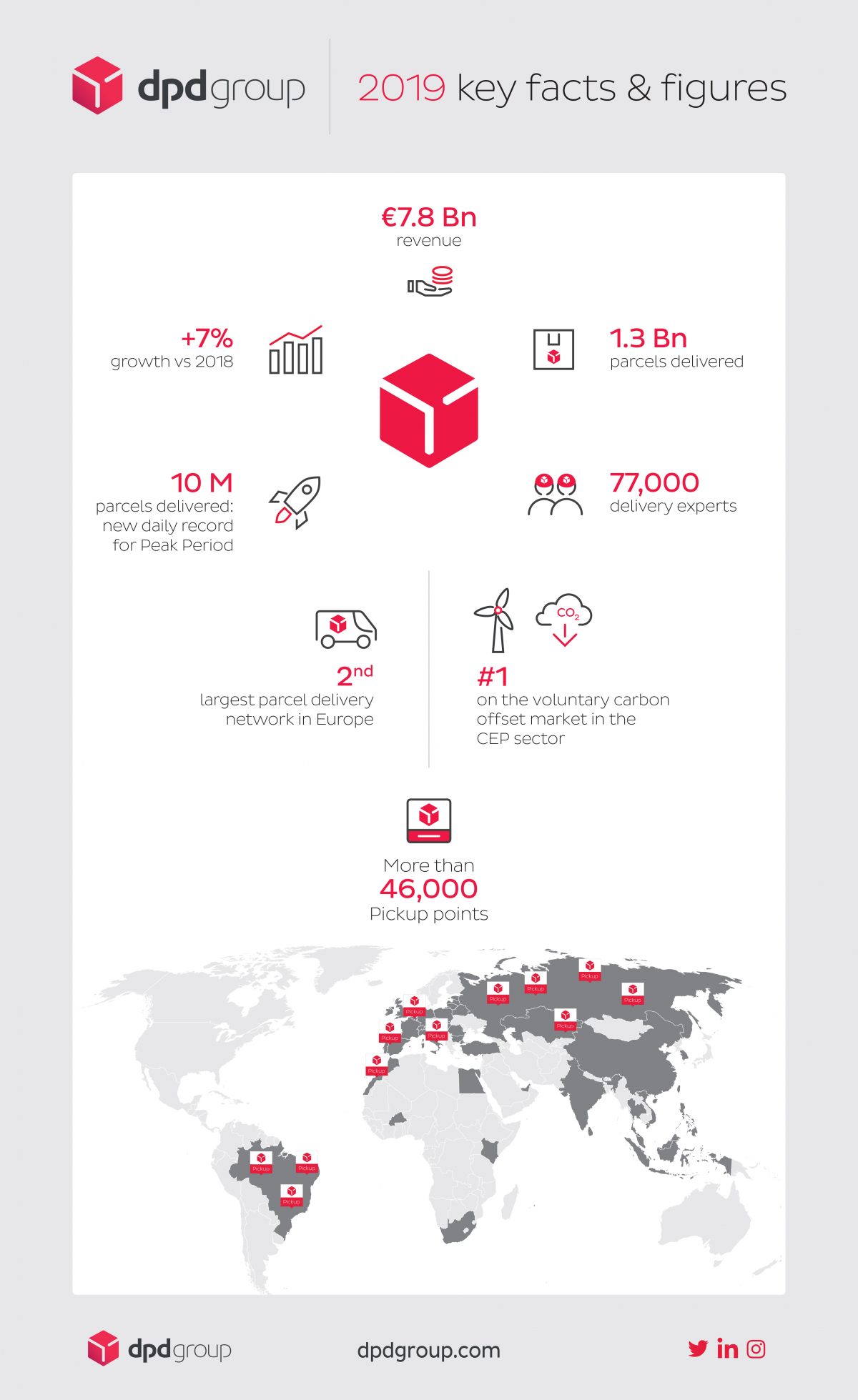